The Mountain Pine Beetle is a small bark beetle 4-7.5 mm in length (about the size of a grain of rice).

In 2006, strong winds carried beetles from BC to the Grande Prairie and Peace River regions. Similar conditions in 2018 carried beetles from Jasper to the Lac Ste. Anne region as well as Yellowhead, Parkland, Brazeau, Leduc, Wetaskiwin, Clearwater, Ponoka and Lacombe counties.

Prevent MPB infestation in your trees and forests 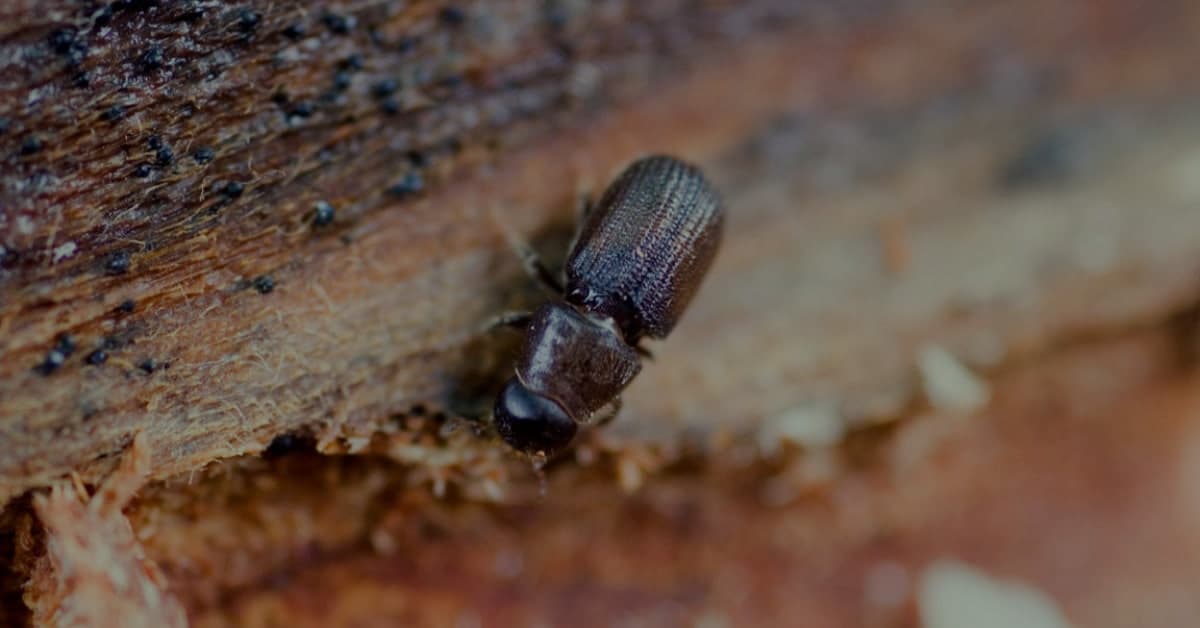 A Bit of Beetle History

60 percent of Alberta’s forests are in the prime MPB susceptibility range of approximately 80 – 120 years old. Normally, only 15 percent of trees should be in this age range. Effective wildfire control (protection of human values, public safety) in our past contributed to forests showing low diversity in age class.

It is unlikely that MPB will disappear from Alberta’s forests. In some areas of the province, MPB will be an issue that needs to be managed now, and further into the future. Management will continue to be adaptive to respond to current situations. 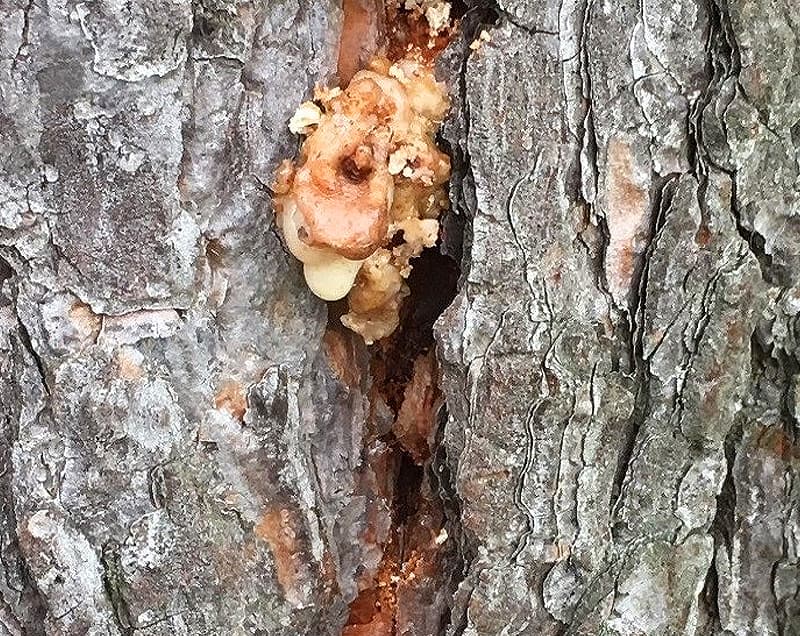 Pine Beetle Pitch Tubes On Pine Tree
YOUNG TREES ARE SAFER
Young pine trees that are smaller than 20 cm in diameter (measured 1.4 m off the ground) are generally not targeted by MPB.

Each year Alberta government foresters carry out aerial surveys and ground assessments to forecast the population and to identify the leading edge and active zones for MPB. For 2021 they reported the numbers of MPB are “definitely down.”  The annual mortality assessments completed between mid- May to mid-June help predict how successfully beetles may spread this season.

For 2022, in Lac Ste. Anne County, it is still worth using Verbenone to protect vulnerable, high value pine trees.  This advice is from Allison Brown, Forest Health Officer in the Whitecourt Forest Area (Agriculture, Forestry and Rural Economic Development). The MPB status will be reassessed for 2023.

In 2006, strong winds carried large numbers of beetles over the mountains from BC into northern Alberta. Each year they move further into the province, in waves from areas with high populations. The fourth wave of beetles arrived in Jasper, then on moved to Hinton, Edson, and Whitecourt.

Since 2018 there have been no new reports of MPB in Lac Ste. Anne.

This is a devastating pest of mature pine forests. While the County has some stands of natural pine forest, many residents are concerned about their shelterbelts and other high-value specimen pine trees.

For 2022, Hinton and Edson are still a possible source of beetles for our County.  However, forestry crews are having good success at slowing their spread by hitting them hard with cut and burn strategies. It is predicted the past winter’s severe cold has also caused a step decline in numbers.

The good news is the cut and burn strategies are working to slow the movement of MPB across the boreal forest and into Saskatchewan. 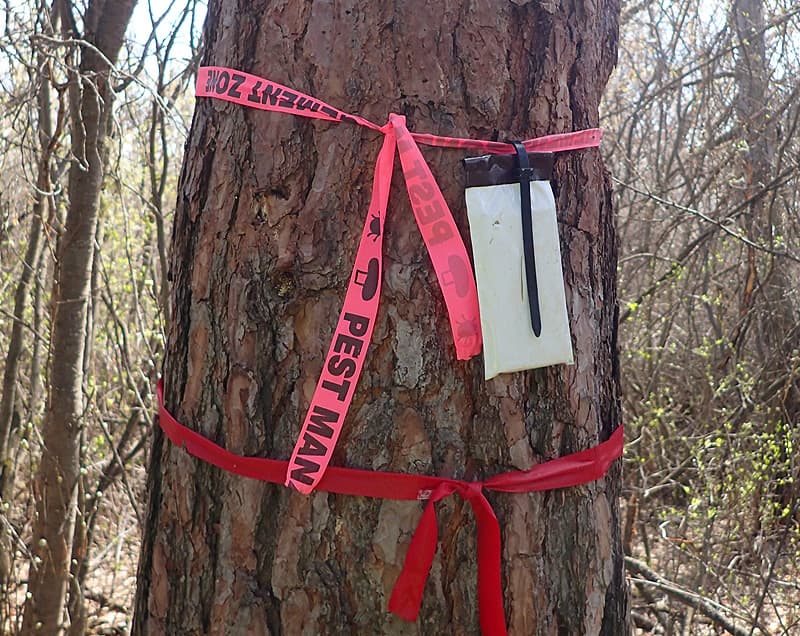 To consult with the County about verbenone, or to book a purchase, please contact Lac Ste. Anne County Horticulturist Lorraine Taylor at 780-203-2968 or LTaylor (@) LSAC.ca
Verbenone can also be found at local garden centres

What type of trees may be attacked?

All species of pine are vulnerable to attack, including the 4 species native to Alberta- lodgepole, jack, whitebark, and limber, as well as the hardy introduced species often planted in shelterbelts and yards- ponderosa, Scots, red, Austrian, and eastern white pine. Mountain pine beetles do not attack spruce or fir trees.

How can I tell if my trees have been attacked?

On the main trunk, look for soft, creamy globs of resin that look like crystallized honey, called pitch tubes, and sawdust at the base of the tree and in bark crevices.

When do beetles attack trees and how long do they stay in trees?

Beetles fly in search of new trees in July and August. The female beetle releases an aggregate pheromone to initiate a mass attack and to attract males. The females then begin to tunnel through the bark and lay eggs. The cycle of eggs hatching and maturing to become beetles is normally one year in Alberta.

What kills the pine tree?

The action of females constructing galleries under the bark for egg laying and the feeding of the larvae interferes with water and nutrient movement in the tree. As well, the beetles introduce a blue stain fungus that grows and interrupts the flow of water to the top of the tree.

If my tree is attacked, will it die?

Healthy trees can resist attack by producing resin to expel beetles. Natural enemies, including disease and predators, along with cold weather can also kill beetles and prevent tree death. Generally, healthy trees can withstand more than 100 hits/tree (identified by the cream-coloured pitch tubes) and are able to survive an attack. These trees may not need to be removed.

Trees overwhelmed by mountain pine beetles usually die within one year. Before making the decision to remove a tree, homeowners can monitor it for signs of a successful attack. In May and June of the year following an attack, look under the bark for live larvae and their feeding galleries.  Starting above a pitch tube, use a hatchet to gently peel back the bark. From May to early July, the year after the attack, affected trees will begin to turn a pale green, looking noticeably different than healthy pine trees.

What do I do if my tree is infested?

How can I protect my trees?

Learn more about the mountain pine beetle and the County's provision of Beetle Block Verbenone to landowners looking to protect their high-value pine trees.

If there was ever a time to lean on each other, it's now. Even if we can’t be close physically, we need to stay close emotionally. So while you’re staying in, stay in touch with each other, and reach out if you need support.
COVID-19 AND YOUR MENTAL HEALTH